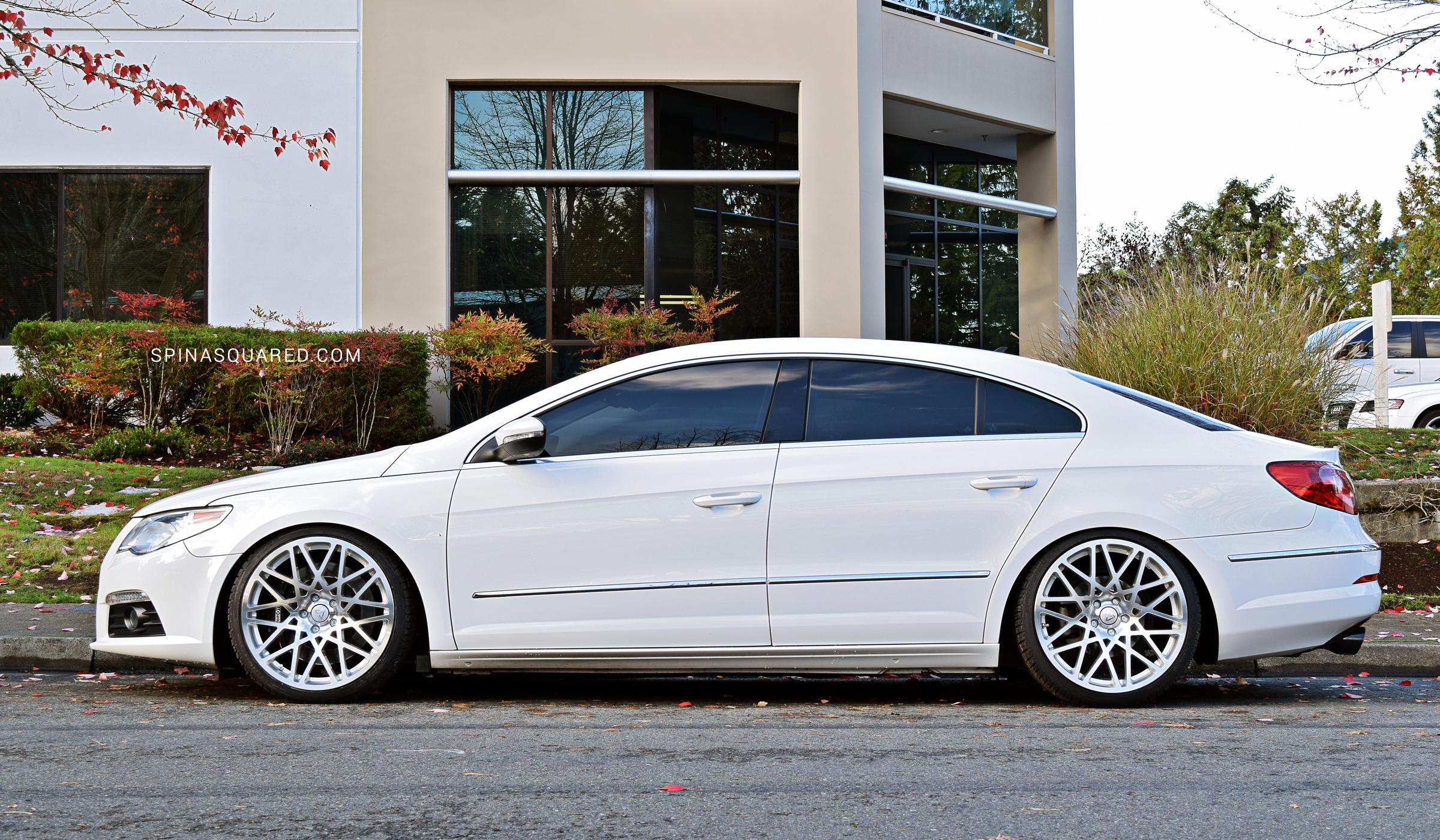 When we raised the suspension on our VW CC to accommodate those 20″ Bavaria wheels we picked up last July we wanted to throw a front sway bar back in the car.   (Sway bar end links prevented us from adjusting the suspension as low as we wanted it at the time so we took the bar out altogether… The sacrifices we make just to ride low.) But rather than reinstalling the stock bar we decided to have H&R’s 28mm front anti-sway bar installed to compliment the previously installed 24mm rear bar.

After going from a “no bar” setup to running H&R’s largest option for the CC, we noticed a big difference!

With almost 90k miles on the odometer and the suspension constantly being put through it’s paces there were other factory parts that were beginning to show signs of wear. The CC’s stock control arm bushings were looking a little tired so Achtuning replaced them with Meyle’s upgraded “HD” control arm bushings. Turns out the “dog-bone” (transmission) mount was also looking pretty worn so a new one of those was ordered.

A clunking sound beneath the car caused by a shifting subframe, the result of factory stretch bolts that degrade over time, also needed to be addressed. It’s a common problem for the VW (Mk5/6) Golf chassis that is also shared with the CC, Eos, and Tiguan. 034 Motorsports’ stainless steel subframe locking collars were also installed at Achtuning which are designed to eliminate that shifting by centering the subframe and upgrading the factory stretch bolts.

The clunks, for the most part, were gone so the 034 Motorsports locking collar kit did its job. There was still a noise we needed to track down and we were hoping the new dog-bone mount we ordered would resolve that. We also replaced the under-side plastic covers because… well, for no good reason other than we hated how badly torn up the old pieces were and it was an eye sore. Interesting to note that the new replacements are more of a felt material vs. a hard plastic which means it won’t sound so bad if and when we ever high center and scrape on anything.

When that new dog-bone mount arrived and was installed it did not eliminate that last clunk but we did ultimately find the source of the noise after bringing the car back to Achtuning to diagnose a sudden loss of power steering… Remember that 28mm H&R front sway bar we just installed? For any other CC owner reading this, do NOT run that bar in combination with an H&R ultra-low kit on your CC! We found that with the (low ride height) suspension geometry the thicker sway bar was coming into contact with the power steering module when the suspension was compressed, ultimately wiping it out. The only way to get a new module and restore power steering was to buy a new rack and that was not cheap! (We could’ve rolled the dice and taken our chances with a used, “yarded out” module but we’re not the gambling type.)

We also had Achtuning reinstall the stock sway bar. The CC doesn’t feel as firm up front as it did with the 28mm bar but maintains comfort while bringing back front end stability. At the current (24.5″ FTG) ride height the bar fits with no clearance issues.

Fast-forward a couple of months and we have now “recovered” from the series of upgrades and repairs on our VW CC 2.0T project. The itch to do something new again was unbearable so we determined we would swap the wheels out again for a fresh new look. Having missed the ride of a 19″ wheel & tire combo again a set of 225/35-19 Continental DWS tires were ordered from Tire Rack.  Then we stared at the wheel display in the Achtuning showroom for weeks while deciding what to run next. The HLP-410 Hartmann Wheels inspired by a design featured on the 2008 Lamborghini LP560-4 was ultimately our next roller of choice!

We are unexpectedly quite happy with the new look! Having seen this “style” on CCs before we didn’t think it would be anything particularly special but now they have us “feeling some type of way!” We’ll run with it for now and prepare for the world of hurt that lies ahead when they are washed for the first time. The Bavaria Wheels are also going up for sale. Details on that in another post coming up.