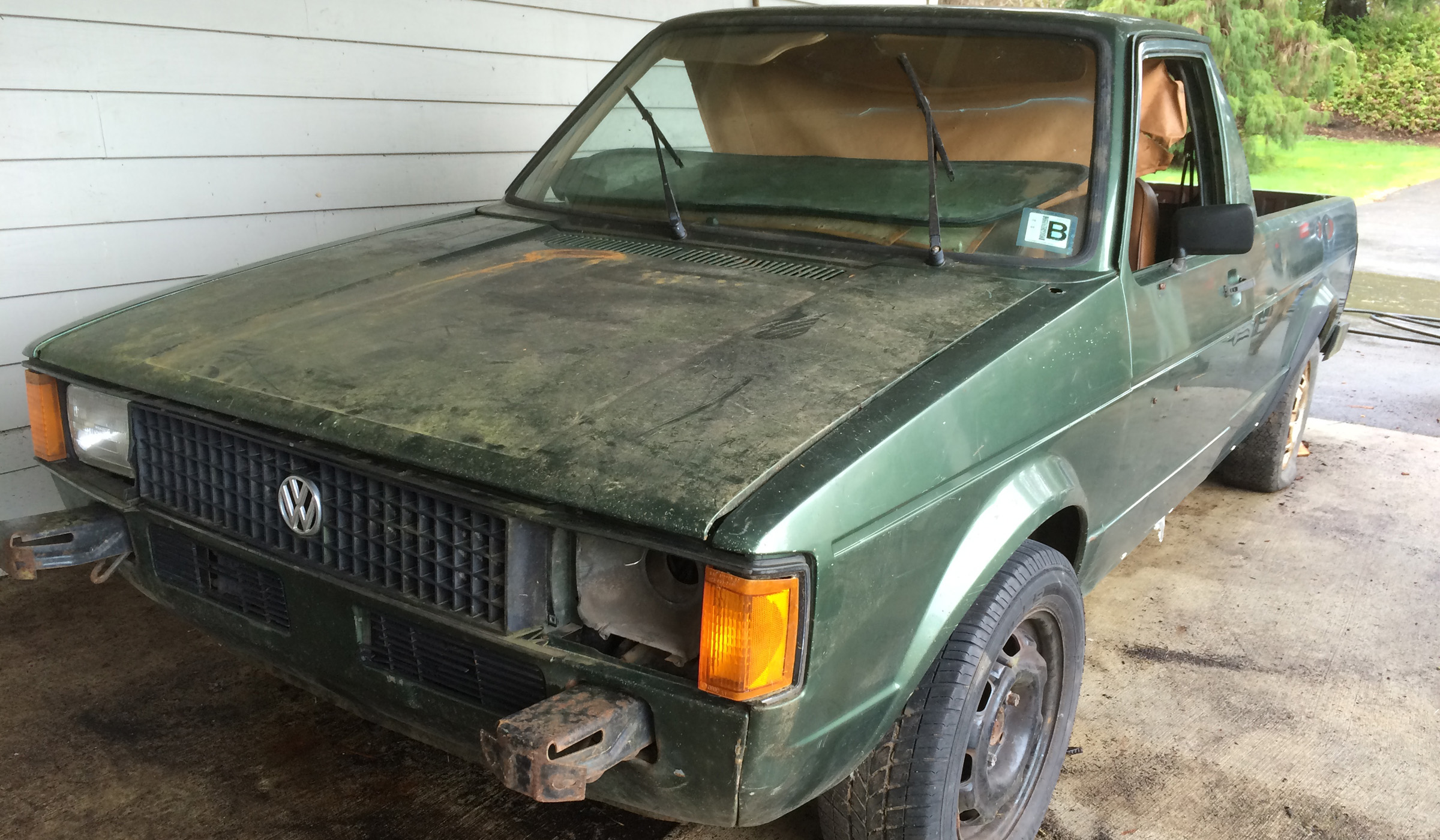 With too many projects in the (body) shop and no time to complete all of them our good friend Hans needed to purge and lighten his load.   There was a 1983 Volkswagen Rabbit “Caddy” Pickup that had been collecting dust (and who knows what else!) for five years under a car port that he and his Dad, may he rest in peace, intended to restore one day. It wasn’t a project Hans planned to get started on any time soon. In fact it would just be easier for him to “let it go and move on”, he said. When Hans mentioned the last person expressing interest in the truck flaked on him, curiosity got the best of me and I had to know what it would take for Hans to part with it. “Haul it away and it’s yours!”, he said. Then the wheels started turning…

Now, I know what you’re thinking. I thought the same for a long time. (Ok, only 2 days). “It’s going to take a LOT of work and money to get this thing up and running”, I thought. As it turns out, I happen to know a few people that are familiar enough with Volkswagens and I even know a guy that can get me parts for CHEAP. ;)  So, after much consideration Jamie and I decided to go for it and commit! Two days later it was ours.

We are “new car” people. That new car smell, creature comforts, a factory-backed warranty… There is a lot to appreciate when you buy a new car and you pay for it, too. What we’re doing with this old “Mk1” is still as much of a surprise and shock to us as it would be to those that know us. There is an incredible amount of work ahead and we would need the help of someone who knew what we were getting into. Fortunately we knew such a person and as luck would have it he even had the used engine and transmission we were going to need for the project. And while some parts may be rare or difficult to locate based on the vehicle’s age, available parts are inexpensive. What more justification did we need to move forward?

To kick off the project, a fresh set of “before” pictures featuring the truck in its acquired state.

Brendon, the friend we hired to help us with the project, came through right away to begin the tear-down. The original 1.7L gas motor and 4-speed transmission whose condition were unknown were being ditched in favor of a 2.0L (ABA) engine mated to a 5-speed (020) transmission. In fact, anything that wasn’t going to be used for the revival of this Rabbit truck was being ditched, including that bit of dock line that seemed to be holding up the exhaust. (lolwut)

While Brendon began the tear down, yours truly got to work scrubbing, pressure-washing, and cleaning up the truck, its reusable parts, and that new (used) motor and transmission. Then there was that laundry list of parts to order…

The used transmission was going to need a new reverse gear so new parts for that were ordered. A machine shop across the way re-surfaced the flywheel that we picked up with the transmission. And we owe our friend Justin BIG for tearing apart that 020 transmission and swapping in the new gear.

While that was happening, Brendon was in another corner refreshing the ABA motor with all new gaskets, plugs, wires, cap & rotor, etc.

3-days worth of work and we already had so much accomplished! Meanwhile more parts were sourced such as H&R “ultra-low” coilovers, a Techtonics Tuning exhaust system, Techtonics Tuning’s shift linkage, and a “plug n’ play” engine wiring harness from Nothing Leaves Stock.

After about a week-long break to help recover from the spending, progress continued this week with the installation of the new suspension, front brakes, and mating of the engine to the transmission.

If all goes as planned we will have a running truck before we know it! Check back soon on our progress.