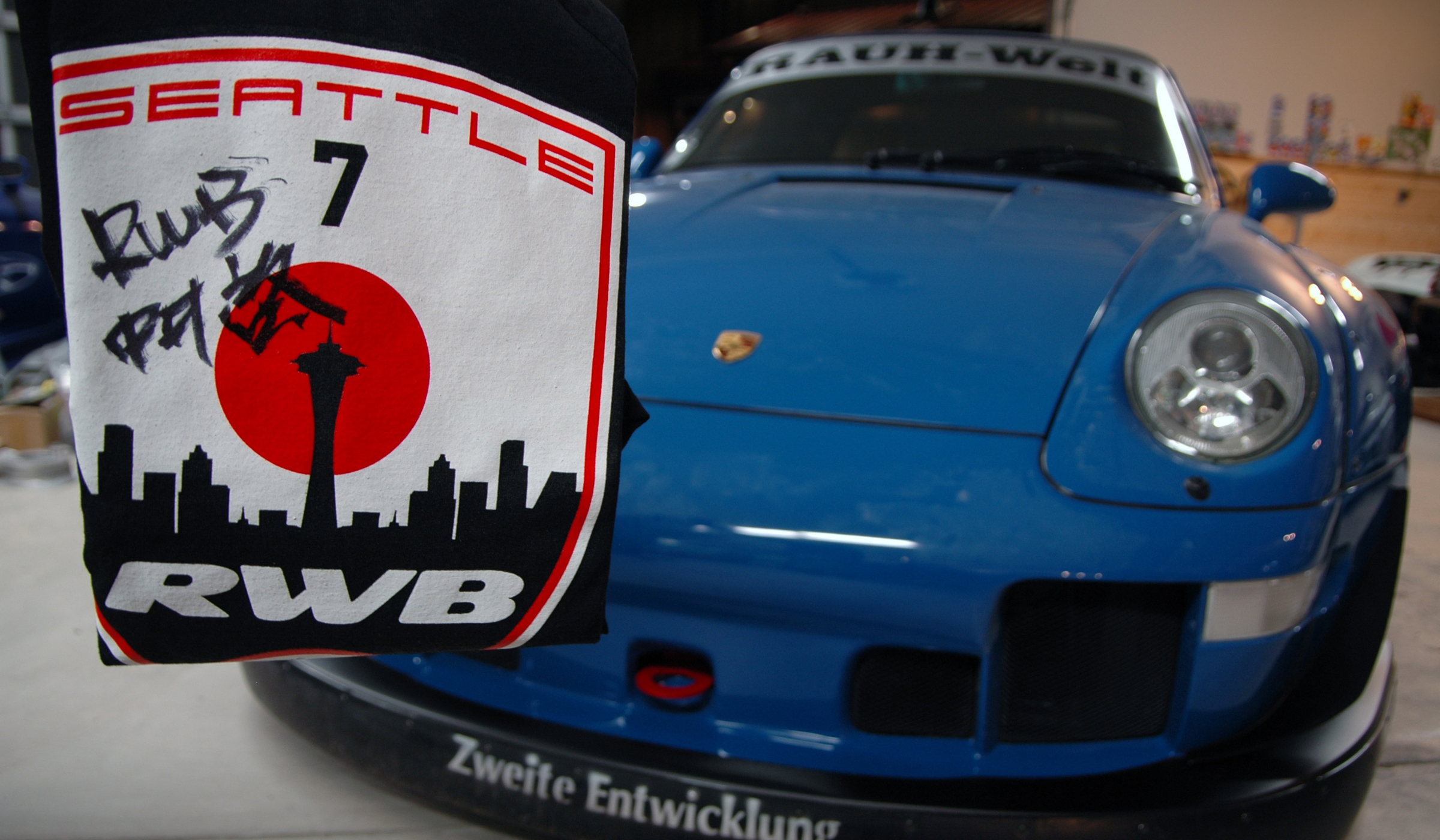 It’s difficult to put into words the feeling as you lay eyes on parts that will one day be shaped by a man whose work you’ve followed and admired for years.

I get the chills and it’s not from the cold, late October air. I am dropping off brake and suspension upgrades sourced through Achtuning for Christian’s newest addition to his amazing car collection, a 1995 Porsche 911 Carrera 2. Christian offers me a drink and hands me my first bottle of Jack Black’s Dead Red Root Beer… it’s damn good! We toast in celebration of exciting times ahead and stand in silence while reflecting on the moment, taking it all in.  Images I had “right-click, saved” for years of these animated, wide body Porsche 911s from Japan flashed in my mind as I recalled the many stories and videos describing the one man behind it all – Akira Nakai of Rauh Welt Begriff – And he was coming to Seattle!

Fast forward to the middle of November and I return to Christian’s home with more suspension parts in hand, the last few pieces needed to tidy up the 911 just days before Nakai-san’s arrival. Anticipation, to say the least, is at its highest. The car has just returned from Phantasy Kolors where Christian had the car painted Sapphire Blue Metallic,  a color selected by Nakai-san himself from Porsche’s 918 color palette. Aside from the crew involved with the painting and delivery of the car, I am one of the first few to see it in person. Bumpers, fender arches, side-skirts, and wing from the RWB kit are also painted and set aside in preparation for the build. Christian makes room in his already crowded garage and parks the 911 where it will sit until its transformation is complete. I stand next to him in the driveway for a brief moment and stare into the garage before heading home for the night. The stage is set and the next few days are going to be unreal! After saying goodnight I get into my car and begin to drive away. One last look back and I see Christian is still standing there, staring. I can’t help but smile… I am happy for him and absolutely thrilled to have the rare privilege to witness it all unfold.

I once thought I would have to go back home to Japan to see a Rauh Welt Begriff Porsche in person. That all changed when an outfit in California asked Nakai-san to come to the States to build one. Next thing we know, 2 RWB 911s make a public debut at the 2011 SEMA Show while a 3rd is spotted rolling around the Vegas strip. Sadly, we didn’t make it to SEMA (again) but the online coverage of the builds quickly launched the RWB brand further into the automotive mainstream while putting RWB much closer within our reach. 3 more cars would be built in North America before I heard from Christian that Nakai-san would be returning to the US to build Lucky #7, “Meguri-Ai” – Seattle’s first RWB!

It’s November 17th, a cold and rainy day in Seattle. A text message from Christian confirms this isn’t all just a dream… Jamie and I really are about to experience a rare, once-in-a-lifetime opportunity. We rush out the door as quickly as we can and arrive at Christian’s by mid-morning. A coffee table and chairs are set up in front of the car and Nakai-san is sitting down with cigarette in hand. I set the Starbucks Coffee Traveler we brought our hosts on the coffee table in front of him and nervously make an introduction. After a brief hello he finishes his cigarette and goes back to work while we join Christian and friends and just sit back, watching in amazement.

I notice Nakai-san already has the 911’s new front bumper installed and it doesn’t take long before he fires up the air compressor and body saw and starts cutting into the freshly painted fenders.

Once the stock fenders are removed he positions the new arches on the 911’s body and shapes the new fiber glass fenders with a belt sander to ensure a perfect fit. All measurements are done with an old measuring tape, no fancy tools or templates for fender placement. Every now and then he sits back while smoking his cigarette and stares at the car from a distance, going over the lines and making sure everything looks and fits just right.

Nice to see Nakai-san let loose and clown around a little as you see him smoking a cigarette through one of the hollow aluminum body panel braces.

By the end of the day all 4 wide body fenders are attached and the 911 begins to take its a new shape.

The next morning I am invited to join Christian, his wife Kit, Nakai-san and a some of Christian’s friends for breakfast. Just minutes before I arrive I get a call from Christian asking if there is room in the CC for him, Kit, and Nakai-san. Sadly, Jamie had to work and was unable to join us on day 2 so I did in fact have room for them and I was honored to get to chauffeur “the boss” to breakfast. And while I am excited to share a table with the legend, my day is made when he gives me a thumbs up in approval as he checks out the CC during a post-meal smoke. “Good styling” he said.

We drive back to Christian’s and Nakai-san goes right back to it!

Side skirts are installed first and then the rear bumper.  You can begin to visualize what the car is going to look like when complete.

Trimming the length of the side skirt, free-hand!

With most of the new body panels attached Nakai-san gets to work on getting those insanely wide 18×11 front and 18×13 rear Work wheels under the new arches. The master of stance is noted for the paper-thin clearance between tire and fender with no rubbing. The wheels are installed and removed several times while he adjusts the ride height on the H&R RSS coil-overs. The process is repeated until Nakai-san feels no further adjustments are needed.

By dinner time Meguri-Ai is on the ground and sitting proper. The ride height is perfect and the top of the tires are just barely tucking those fenders. The “Champion Wing” is installed and completes the RWB body kit.

Just before the end of Day 2 Nakai-san pulls out the Rauh Welt windshield banner, a sign the build is coming to a completion.

Very few people in the world get the amazing and rare opportunity to experience what we did those few days. From a car guy’s perspective, this is pretty tough to beat.  Not many understand or even appreciate the RWB styling and what Nakai-san is all about and they don’t have to.  It makes it that much more special for the rest of us who do.  Why were we there? One could say we were in the right place at the right time. It was truly a “chance encounter” and an experience Jamie and I will never forget. To Christian and Nakai-san we say, “Thank you!” from the bottom of our hearts for allowing us in to take part and witness the creation of the first (and we hear not last!) Seattle Rauh Welt Begriff Porsche 911!